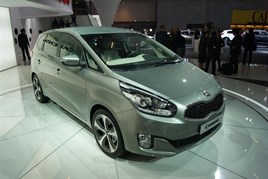 Kia is deliberating whether to take only the seven-seat option when the new Carens is launched next year.

The compact MPV, which is described by Kia UK managing director Michael Cole as “chalk and cheese” compared to the outgoing model, features greater space front and rear thanks to a longer wheelbase (despite being slightly shorter overall) and much improved quality with softer materials and tactile handles and switches.

It also has a number of new active safety features, including include lane departure warning system and parallel parking assistance, and a panoramic glass roof.

Pricing is expected to start at around £17,000, a £2,500 premium over the outgoing model. Kia has taken this approach for every new car launch over the past three years each has been successful.

“It is a value for money proposition but won’t be the cheapest: there will be a price step up from the old model,” said Cole.

“We are also selling higher in the specification range than we expected, for example more Ceed 3 than Ceed 1. We will probably do more of the £20,000-21,000 Carens but for fleet it’s more about the lease price than the headline price.”

As the seven-seat derivative would probably only attract a £500-600 premium over the five-seat version, Kia seems set to bring only this model to the UK.

“We are taking a family orientated message around the flexibility and practicality of this car, with occasional seven-seat versatility a strong selling point,” said Cole.

Around one-third of volume will be to Motability customers, while user-choosers will make up the balance of the fleet business.

The 1.7-litre diesel, currently in the Sportage and Optima, will account for the bulk of the sales. It is available in two power outputs – 113bhp and 134bhp – with the lower rated version likely to be popular with user-choosers.

Combined with Kia’s ISG stop/start system, the 113bhp diesel has CO2 emissions of just 118g/km, a 19% improvement over the outgoing Carens.

The higher output 134bhp option is expected to pick up more sales from Motability customers because it comes with the option of a six-speed automatic gearbox.

A 1.6-litre petrol is also available, but Kia is unlikely to bring the high-powered 2.0-litre 174bhp petrol to the UK.