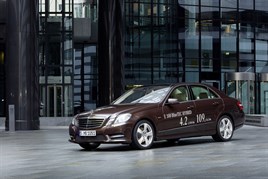 Bosch’s latest hybrid technology will be in action during the RAC Future Car Challenge on 3rd November, with a Mercedes-Benz E 300 BlueTEC HYBRID driven by Bosch UK president, Peter Fouquet.

Bosch provides the motor for the hybrid’s advanced drivetrain, which primarily acts to reduce emissions at lower speeds.

The motor supports a four-cylinder diesel engine and permits the engine to shut down and go into a ‘coasting’ mode when the foot is taken off the throttle, which helps save fuel at speeds up to 100mph.

Fouquet said: “I’m very excited to be taking part in the Future Car Challenge and have an opportunity to show off the efficiency of Bosch’s hybrid technology.”