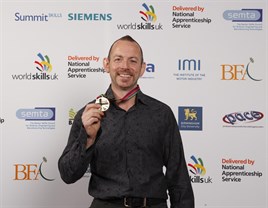 Auto Windscreens’ technicians Steve Abrahams and Mark Blaylock fought off stiff competition from the best in the country to take both gold and silver at the UK Master Fitter final on November 16 and 17.

Now in its third year, UK Master Fitter is part of WorldSkills UK, which runs national and international competitions, designed to showcase talent in vocational skills in different business sectors.

WorldSkills UK is managed by the National Apprenticeship Service, in partnership with organisations from industry and education.

Abrahams (pictured), who works from the Newcastle fitting centre and Blaylock, who is based in Leeds, were among six top scoring technicians from the seven regional heats in England, Northern Ireland and Scotland competing for the title.

The final took place at The Skills Show at the NEC, where competitors were required to repair and replace a windscreen and a side and rear window, all within a specified timeframe and under the watchful eye of the UK Master Fitter judges.

Theo Paphitis, patron of the Skills Show, said: “Congratulations to the winners of this year's WorldSkills UK National Competition Finals. There has been some fantastic work produced and I hope this will show everyone how Apprenticeships and vocational training can lead to worthwhile and valuable careers.”

Nigel Davies, managing director of Auto Windscreens, said: “We’re so proud that Steve holds the title of UK Master Fitter, and that Mark followed closely behind in second place. These medals not only pay tribute to the fantastic technicians we have at Auto Windscreens, but also our superb support teams including Technical and Innovation as well as our fitting centre managers. I’ve always known it, and now it’s official - to quote the words from Tina Turner – we’re simply the best, better than all the rest.”