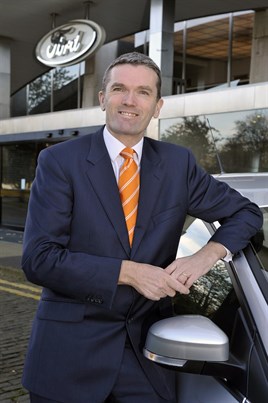 Kevin Griffin has been promoted to lead Ford's commercial vehicles division in Europe, while his UK fleet role will be taken by Phil Hollins (pictured).

Griffin had been director of fleet operations, Ford of Britain, since 2003. Both appointments are effective January 1, 2013.

Phil Hollins joined Ford as a graduate trainee in 1985.  He held a variety of sales and marketing roles in Ford of Britain before moving to the US in 1994 and then to Ford of Canada as cross vehicle line marketing manager in 1996.

Hollins returned to the UK as director marketing Ford Credit and he was appointed director dealer operations Ford of Britain in 1999.

His Ford of Europe responsibilities include director European retail management, in 2002, and his current role as director product marketing, which he took up in 2010.

Mark Ovenden, Ford of Britain managing director, said: "Phil will be a great addition to our team, he brings a wealth of experience in the global automotive business to Ford of Britain’s fleet operations.

"He will build on the excellent foundations provided by Kevin who has established a highly successful, disciplined approach to all areas of fleet sales that has matched market leading results with solid business returns."

Born in Chester, in 1961, Hollins is married with two children and lives in Bishops Stortford in Hertfordshire.  He is a keen golfer and runner and supports Chester City FC.