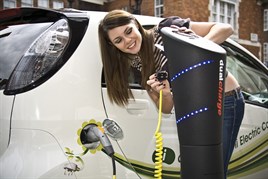 Electric vehicle (EV) charging infrastructure provider Chargemaster Plc has reached an agreement to acquire Elektromotive, the Brighton-based company that was the first to introduce public EV charging stations in the UK nearly 10 years ago.

Charg master says the acquisition will give it a financially, technically and operationally strong platform from which to further expand internationally.

Access to Chargemaster’s technology and manufacturing processes will enable Elektromotive to reduce production costs and the consolidation will reduce overheads for the enlarged group.  It is the intention that the two brands will continue to be marketed in parallel and the economies of scale will enable the group to become increasingly competitive in terms of pricing, in a marketplace where it is expected that rapid growth will be driven by reducing prices.

Elektromotive's geographical reach complements Chargemaster’s, including the London Boroughs and the North-East of England and in Scotland.  Elektromotive also has more than 15 re-seller distribution partners globally.

Chargemaster, with its strong presence in London, Southern England and the Midlands, has a portfolio of 30 products, from rapid charging units capable of re-charging EVs in under 30 minutes to low cost overnight domestic charging.  It has secured key motor manufacturer partners such as Nissan, Renault, Vauxhall and Toyota, as well as partnerships with energy companies such as British Gas and SSE.

David Martell, CEO of Chargemaster, said:  “I am delighted that we have reached this agreement with Elektromotive; the two companies target highly complementary sectors of the market and offer synergistic product ranges. The Enlarged Group can now focus on growing its market share across Europe by producing the most technically advanced and value for money charging units on the market.”

Calvey Taylor-Haw, managing director of Elektromotive, added: “This is an extremely positive deal, not only for the two companies but also for the industry and customers. I have respected the market drive and innovative technology that Chargemaster has brought to the sector over the last few years and my senior management team and I look forward to working with David and the rest of his team in making the Enlarged Group a worldwide force in this exciting and rapidly growing market.”