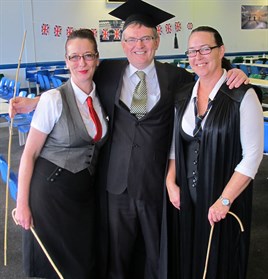 The theme for National Ben Week this year was ‘Back 2 School’ and staff at BCA raised over £5,000 for the industry charity.

Competition was fierce amongst locations nationwide as they tried to outshine one another and raise the most money individually. Top marks eventually went to staff at Brighouse.  Kendra Brecon, business administration manager at Brighouse commented “Our ‘Back 2 School’ theme was Rydell High from the movie Grease.  We auctioned two Ben Bears, sold cakes, buns and biscuits at our Tuck Shop, dressed up as Pink Ladies and T-Birds and sold a car kindly donated by The Car People which raised £525.”

Staff at Belle Vue were runners-up  generating £897 for BEN through a charity raffle, wet sponge throwing, sponsored basket hoops, a staff 'Back 2 School’ quiz and a dress down day.

Ben regional development manager, Tracy Brislen said, “BCA have consistently been one of the biggest fundraisers during National BEN Week over the years and on behalf of everyone at BEN, I would like to thank everyone at BCA nationwide who got involved.”

Kelly Neal, events and exhibitions manager at Ben added,  “We’re delighted to see this year’s theme encouraged companies to really use their imagination, entertaining staff and customers. Well done to BCA for raising this impressive sum and substantially passing their total for 2011.”