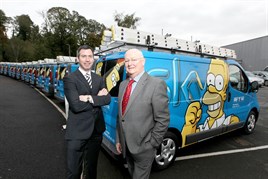 In one the biggest single orders for Vauxhall Fleet in Northern Ireland, Belfast-based Fleet Financial has delivered 70 customised Vauxhall Vivaro vans to Sierra Support Services that will tour the country as part of Sky TV’s installation and service team.

Wrapped in Simpsons’ and Sky HD liveries, the £2 million fleet, put together with the help of Vauxhall Fleet Sales, will cover Northern Ireland.

The coordination of handing over 70 vehicles in a two-day period required supplying dealer, Charles Hurst, to go the extra mile.

Each of the Vivaros, powered by the frugal common-rail 2.0CDTi (115) engine, had to receive a pre-delivery inspection before the specialist installation of the shelving, roof racks and graphics.

The operation ran so smoothly that the vans were turned around in just six weeks and the individual operators could collect their vehicles, uniform, equipment and parts from a central location and start work the next day.

Jim Humphreys, of Fleet Financials, said: “The strong support, all the way from the factory to the dealer, was key to us winning the deal and supplying these vehicles.

“The Vivaro is rightly recognised as a national fleet vehicle, and because we’ve worked with the Vauxhall brand for the last 15 years, this gave us the absolute faith in the vehicles’ abilities.”

He continued: “Rather than supply a number of different makes and model of van, we were able to deliver 70 identical vehicles – a vital selling point. We’re confident of the vans’ capabilities, the servicing costs and the lack of down time through reliability issues – you can’t afford to have this kind of vehicle off the road.”