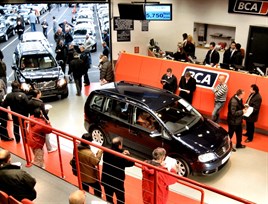 Fleet and lease used car values increased by £279 (3.7%) to £7,714, the highest point in over a year and one of the highest average values on record, according to BCA.

CAP performance again improved by just over one point to 98.78%, with the average age at 41 months and mileage of just over 50,000 remaining virtually static compared to previous months.

Performance against original MRP (Manufacturers Retail Price) was 39.38%, while year-on-year values were ahead by £161 or 2.1%.

BCA’s latest Pulse report shows that overall average used car values increased in February, climbing from £6,040 to £6,244. The £204 rise was equivalent to a 3.7% improvement, month-on-month.

While values remain adrift of December 2011’s record levels, February 2012 is the third highest figure since Pulse began reporting and, year-on-year, is ahead by £259 (4.3%).

“Values were also up again year-on-year, no doubt helped by some minor improvements in the wider economic indicators in recent weeks and some encouraging news on inflation.

“But with news that mortgage rates will rise for some householders in the coming weeks, any improvement in consumer confidence may be short lived.”

Gannon continued: “Additionally, we are approaching a time when volumes can rise with the new registration plate prefix generating additional part-exchange numbers and corporate de-fleets, a period which is often accompanied by a softening in demand as Easter approaches.

“Sellers must continue to be in tune with market conditions and make sure stock is sensibly valued in line with market expectations.”