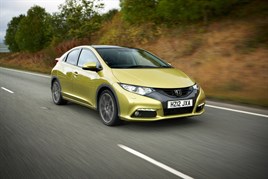 Honda is hoping a range of new initiatives will boost its appeal with fleets ahead of the launch of the Civic this month.

As well as offering a class-leading power-for-CO2 position with the new car, fleet boss Ed Hummel, who took over the reins in spring last year, has put in place measures to renew confidence in the brand.

Four key components of his strategy are to create closer relationships with leasing companies, increase time with end-user customers, empower fleet dealers and sell the Honda ownership experience to customers.

Hummel told Fleet News: “We have great products, and what we’re doing with leasing companies is pivotal to our future success.

“We don’t have our own finance company, and our current finance package is provided by Lex Autolease.

“We give leasing company customers access to prices early so they are in a position to quote on models when we open order books.

“The result has been that the Civic went on sale with standard support and is second only to the Vauxhall Astra for rental rates in the sector.”

Hummel said he also expected a revised version of the Insight hybrid, now on sale and with CO2 emissions below 100g/km for the first time, would help renew interest in Honda as a manufacturer of low-carbon cars.

It is also launching the new banner, Earth Dreams Technology, to encompass all it is doing to minimise CO2 emissions. The first Earth Dreams engine produced will be a 120bhp 1.6-litre diesel for the Civic late in 2012, which is likely to be a sub-100g/km car. Honda will use Earth Dreams Technology to meet its target of having the lowest fuel consumption cars in each of the categories they compete in within three years.

Hummel is keen to fight back from Honda’s current position (it ranked 17th manufacturer in the list of total fleet sales in 2011) and challenges include being exposed to problems caused by a strong Yen in Europe, which makes cars built in Japan more expensive to bring to the UK.

There is some relief that 80% of the Hondas sold in the UK are built here, with its Swindon plant producing the Civic, CR-V and Jazz, but Hummel also resists serving the daily rental market, he says, to ensure Honda residual values remain strong and make the products more desirable with competitive running costs and leasing rates.

He said he wants Honda to have a more transparent relationship with leasing companies, suggesting there were times when they did not find out about new initiatives until Honda launched them.

Hummel added: “We recently held a meeting for 20 MDs of FN50 leasing companies, which is a first for us and goes a long way to improving relationships and developing trust.”

He says part of Honda’s recent failure to engage successfully with fleets has been poor communication, pointing to the success of other brands’ initiatives.

“Renault has made a great success of its Business Promise,” said Hummel. “We do all of the same things that Renault does, but we haven’t done a good job of communicating it to our customers.”

Hummel was speaking to Fleet News at an event organised for fleet customers around the European media launch of the new Civic in Spain.

He said the event was one of the ways in which Honda was re-engaging with end-user customers, and said he was committed to maximising time spent with customers.

“There are 2,200 fleet customers buying our cars at the moment,” he said. “But this is a relatively small number compared with the 160,000 companies running more than five vehicles.”

Hummel says that although Honda has lost ground against many other mainstream brands in the fleet market, it is in a good position to act quickly when customers ask for changes to make their jobs easier.

One of the initiatives Honda is keen to talk to leasing companies about is the ability of its dealer network to carry out fleet SMR work efficiently.

“We have 180 dealers and of those 37 are corporate specialists,” said Hummel.

“We had 46 corporate specialists at the beginning of this year, but some dealers were happy to come out of the corporate sector as we now impose higher standards.