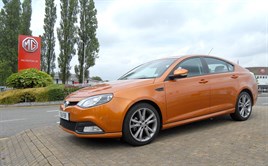 MG is entering the lease hire business with a new contract hire scheme called MG Lease, which will be offered throughout MG Motor UK’s dealer network.

Initially MG6 GT fastback S and SE models will be available under the scheme. Within a few months MG6 GT TSE models and MG6 Magnettes will be added, along with used MG6 VAT qualifying cars up to a year old and with a maximum of 15,000 recorded miles.

Richard Bourton, MG Motor UK’s regional operations manager in charge of MG Lease, said: “There is a huge potential for the MG6 to be marketed to the ‘user chooser’ company drivers who want to be seen to be driving something different from their colleagues.

“The distinctive MG6 will certainly stand out from the crowd in the company car park which is often dominated by Mondeo and Insignia models. I think the MG will have big appeal.”

Bourton added: “This is our first venture into the fleet business and all the signs are that it will be a great success, given the interest we have already seen.

“We’ve had lots of business people asking about contract hire and now we can offer them a great deal. The MG6, with its enormous boot and spacious cabin, offers business people so much more than its competitors.”