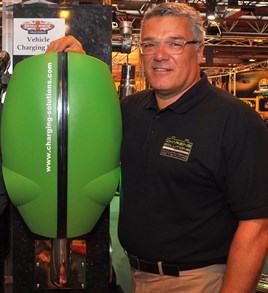 UK-based Charging Solutions has been named as an approved supplier of electric vehicle charge points for a £500,000 project in Northern Ireland.

The company has teamed up with the Ecar Project - an initiative which is bringing electric vehicle infrastructure to Northern Ireland.

The Home and Workplace Charge Point Grant scheme was launched this month and will see the first 300 purchasers of an electric vehicle in Northern Ireland eligible to apply for £1,500 towards the cost of an installation.

Charging Solutions, which provides plug-in charging points and equipment for both commercial and domestic use, has been named as an approved supplier by Ecar Project team at the Northern Ireland Department for Regional Development.

Managing director James Jean-Louis (pictured) said: “This is a fantastic scheme which has already seen charging points installed in major locations across the country, from city centre streets to car parks.

“However the Ecar Project recognises that being able to charge cars at electric vehicle users' homes and workplaces is a priority and so have extended the initial scheme to address this, allocating nearly £500,000 for this work.

“We are delighted to be named as an official supplier which means we have demonstrated that our Charging Solutions Charging Points are compliant with the conditions for the grant, and we are currently one one of only four companies formally approved.”

The grant, for ‘smart’ electric charging points which informs the user of their electricity consumption and monitors how often and when they recharge the vehicle, is to a maximum value of £1,500 and is available until March 31 2013.

One of the conditions of the grant is that the data collated by the ‘smart’ charge point must be accessible to the Ecar Project.

Each ‘smart’ electric charging point will automatically download data to the Ecar Project from the date of installation until 2016.

Charging Solutions' products include wall or ground pole mounting and flexible access options, from simple push button activation to its GSM/GPRS based management and payment system.