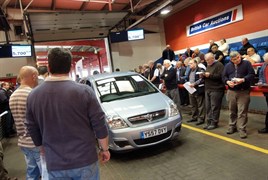 The used car market reacted to the typical seasonal pressures as values fell in the post-Easter period, reports BCA.

Average monthly used car values fell by £375 (6.2%) in April compared to March and month-on-month values fell in all three main market-sectors, although fleet/lease values experienced the least pressure with a fall of 1.9%, compared to a 3.1% reverse in part-exchange values and a 5.2% fall in the nearly-new sector – a decline resulting from changing model-mix in a low volume sector.

BCA’s communications director Tony Gannon said: “There were signs in March that values would be coming under pressure, with the short-term seasonal uplift in de-fleets and part-exchange cars increasing supply and with wholesale demand reducing as dealers balanced their stock.

“It was notable that demand held up best in the fleet/lease sector, where buyers continue to focus on quality and value, and competition for the best examples is intense. In the context of the wider market, good quality fleet vehicles remain in short supply and values are relatively strong.”

While the fleet & lease sector saw some price pressure, in general it outperformed the wider market and year-on-year values were ahead by £227 or 3%, despite average age and mileage being slightly up in 2012.

CAP performance fell by two and half points to 95.87% with the average age remaining at 41 months, but mileage increasing to over 49,000. Performance against original MRP (Manufacturers Retail Price) fell by half a point to 39.58%.