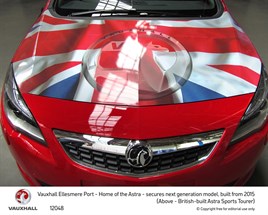 Vauxhall has confirmed that the next-generation Astra will be built at its manufacturing plant at Ellesmere Port in Cheshire.

The announcement puts to bed months of speculation about the future of Ellesmere Port and follows the conclusion of a new labour agreement which was approved by the Vauxhall workforce yesterday (May 16).

The agreement comes into force in 2013 and runs through the life of the next-generation Astra, into the early 2020s.

As part of the agreement, the plant will implement a number of operating solutions to improve flexibility and reduce fixed costs which are expected to improve its competitiveness. Ellesmere Port plant will subsequently become one of the most competitive plants in the Vauxhall/Opel manufacturing network.

Assembly of the new Astra is scheduled to start in 2015. Operating on three-shifts, the plant is expected to run profitably at full capacity utilisation and produce a minimum of 160,000 vehicles each year.

Vauxhall/Opel intends to invest £125 million into the facility to upgrade it to the latest manufacturing standards and prepare for production of the new model. The company expects to create around 700 new direct jobs in order to facilitate the three-shift operation.

Vauxhall will also raise the local supply content for the Astra to be built in Ellesmere Port to at least 25% which will create further employment locally and in the UK overall and further increase the plant’s competitiveness.

Vauxhall chairman and managing director, Duncan Aldred, said: “This is great news for the Ellesmere Port plant, our employees, the local community, our suppliers, the Vauxhall brand and the UK. We have been able to develop a responsible labour agreement that secures the plant’s future. This is assisted by the government‘s industrial strategy increasing its focus on the manufacturing sector and creating ideal ground for companies to build up long term investments.

“With Ellesmere Port’s proven build quality and a new agreement that ensures excellent cost competitiveness, this facility will provide additional employment and, as the lead plant for the next-generation Astra, will be one of the cornerstones of our European manufacturing footprint.”

Philippa Oldham, head of transport and manufacturing at the Institution of Mechanical Engineers, welcomed the news.

“The UK car manufacturing industry is seeing a much needed renaissance, leading to the UK’s first trade surplus since the 70s,” she said.

“The UK has some of the most cutting-edge and innovative manufacturing in the world and it is heartening that companies like General Motors recognise this. Manufacturing has the ability to help lift the UK economy out of its current rut, and Government must focus its support on industries in which the UK excels and which provide economic resilience.”