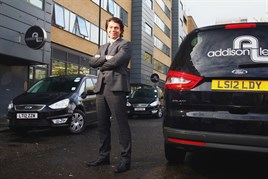 For the first time, Addison Lee has agreed a two-year contract with a manufacturer, rather than a 12-month deal, meaning up to 3,000 Galaxy models will join the fleet during the contract period. Its 3,500-strong fleet of premium minicabs is largely Ford-badged supplying around 50 vehicles per week.

Addison Lee managing director, Liam Griffin, said: "With more than 3,000 of our Ford Galaxy vehicles on the streets of London, the Addison Lee fleet is a familiar sight in the capital. The Ford Galaxy has become synonymous with Addison Lee and representative of our professional service, so we are delighted to partner with Ford for another two years."

Kevin Griffin, Ford of Britain fleet director, said: "We are delighted that Addison Lee has again recognised the Ford Galaxy's class-leading attributes. Addison Lee's prestige status as a provider of premium minicabs and chauffeur-driven cars is a great complement to Ford's dedication to vehicle quality and reliability. Fleet customers like Addison Lee are taking a closer look at reducing vehicle emissions and I'm delighted that Ford is helping them achieve that."