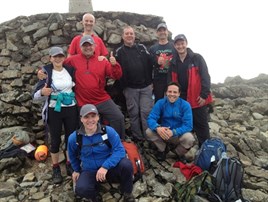 Inchcape UK has completed the UK Three Peaks in 24 hours Challenge to raise money for BEN, the automotive industry charity.

Inchcape had 10 teams, representing each of their brands; a team of retail support staff and a team comprised of volunteers from across all brands that climbed as part of the CEO team.

The challenge began in one of Scotland’s most scenic areas: Glen Nevis Valley, where the teams climbed Ben Nevis, the largest mountain in the UK, standing at 1,344m.

The times for the teams varied ranging from 4 hours 44 minutes to 6 hours 15 minutes.

Scafell Pike, the highest mountain in England standing at 978m was the second peak the teams attempted to climb but during the approach to the mountain the Inchcape teams found out that they would not be able to do the climb because of flooding and mountain rescue still getting people out of the area from the day before.

With this in mind and the teams fighting the disappointment they travelled to the last of the climbs the highest mountain in Wales: Snowdon, standing at 1,085m completing the climb in around 2 hours.

Kelly Neal, events manager at BEN, said: “Completing a challenge such as the UK Three Peaks Challenge is an amazing feat and to get 100 members of staff to take part is even more so. The funds raised by Inchcape are greatly appreciated and vital to allowing BEN to continue giving much needed help to people in times of need.”