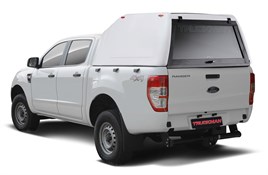 Auto Styling Truckman has expanded its range of hardtops for the new 2012 Ford Ranger with the introduction of the Truckman Classic and the Truckman RS.

The new releases are hot on the heels of the launch earlier this year of the Truckman GLS, The Grand and the S-Series luxury.

In keeping with the rest of the range, the latest additions have been designed specifically for the 2012 edition of the Ford Ranger at Auto Styling Truckman’s West Midlands’ factory.

Mike Wheeler, managing director of Auto Styling Truckman, said: “The refinements Ford has made to the 2012 Ranger has made it more appealing to a wider audience of both commercial and private owners, which is why we have created a larger collection of hardtops to meet their varying requirements.

“We have been designing and manufacturing hardtops for the Ranger since the first model a decade ago and as Ford has improved its vehicle we have done the same with our hardtops.”