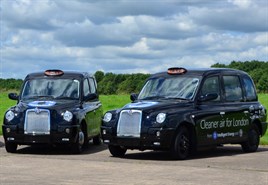 Deputy Mayor Kit Malthouse has been handed the keys to five hydrogen fuel cell powered taxis provided by the HyTEC (Hydrogen Transport for European Cities) project. The taxis will be used to transport VIPs in London during the Olympic Games period, and will be fuelled at Air Products’ new hydrogen fuelling station at Heathrow airport.

The pioneering fleet of fuel cell taxis have been developed by the UK power technology company Intelligent Energy, who provided the fuel cell systems for the vehicle power-train, and The London Taxi Company, who build and supply the London black cab. They are ready to start transporting visiting dignitaries and the VIP guests of the Greater London Authority during the period of the Olympic and Paralympic Games.

A new Air Products hydrogen fuelling station, that will be used to fuel the taxis as they transport VIPs to and from the Games, will shortly be opened at Heathrow Airport in an addition to the developing London hydrogen network. This new station will connect up with the fuelling station already in operation in the city, supporting London's hydrogen bus fleet and adding to the infrastructure powering hydrogen fuel cell electric vehicles across the UK. The vehicles and refuelling site form part of the Mayor's vision to promote innovative zero and low emission technologies in the capital to clean London's air and tackle pollution. London already boasts the UK's only zero-emission bus route running with a fleet of five hydrogen buses.

Malthouse said “London's hydrogen economy is bounding ahead. The HYTEC project has been a terrific success, and it provides great lessons for others to get ahead in the most exciting new industry of the 21st Century.”

Diana Raine, HyTEC project coordinator and European business manager, Hydrogen Energy Systems at Air Products said: “We are delighted that the HyTEC consortium will soon be opening the new hydrogen fuelling station at Heathrow airport and have unveiled the black cabs that are going to transport VIPs during the Olympic Games. The success of the HyTEC project is an essential step in creating a zero emission hydrogen transport infrastructure in London.”