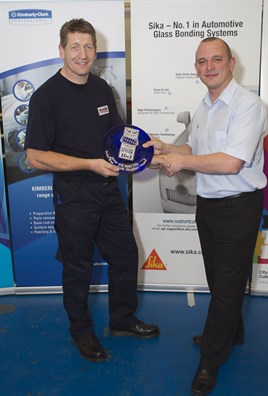 National Windscreens’ automotive glazing technician, Sean Hurley, has been named as one of six finalists to make it through to the UK Master Fitter 2012 final taking place at the NEC in November.

Hurley, from the Staples Corner branch in London, was the highest scoring entrant out of seven regional heats. He has worked at National Windscreens for four years and has 32 years’ experience of repairing and replacing vehicle glass. He says, “I’m delighted to have made it through to the final. It’s great that our industry’s skills are recognised in this way and hopefully it’ll raise awareness of the trade amongst young people deciding what career path they’d like to take.”

The two day final will involve competitors repairing and replacing a windscreen and replacing a door glass and a rear window, within a specified timeframe under the scrutiny of the UK Master Fitter judging team.

UK Master Fitter, part of WorldSkills UK, is now in its third year and another National Windscreens’ technician, Matt Cassells, was declared winner in 2010.

Commercial director, Pete Marsden, says, “We’re really proud that Sean has made it through to the final. National Windscreens operates the UK’s largest branch network in the industry and we have more than 800 mobile technicians. Our business is built around customer service and ensuring our technicians have the skills they need means our customers get the service they deserve.”