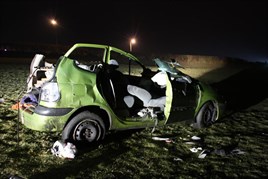 Figures released by the Department for Transport (DfT) confirm that 1,901 people were killed in road accidents in 2011, an increase of 3% on 2010 figures.

Meanwhile, 23,122 people were seriously injured, an increase of 2% on 2010 figures and the estimated number of people killed in drink-drive accidents increased by 30 to 280. The provisional number of killed and seriously injured because of drink driving rose by 5% to 1,570.

Failing to look properly was the most significant contributory factor, reported in 42% of all accidents.

IAM director of policy and research Neil Greig said: "The increase in deaths and serious injuries because of drink driving is absolutely shocking. It accounts for more than half of the increase in road deaths.

“We must see a drink driving education campaign, backed up with enforcement, to put an end to these completely unnecessary deaths.

"With last year's surprising increase in deaths and early indications from 2012 that a trend could be developing, the IAM urges the new road safety minister to make road safety his absolute priority.”

The DfT statistics also reveal that 205 people were killed or seriously injured in an accident where illegal, defective or under-inflated tyres were a contributory factor.

Worryingly, the shocking statistic is an 8% rise on the previous year’s figures and goes against a year-on-year decrease since TyreSafe was formed.

“These latest figures are very disturbing, especially given that the number of casualties in all road accidents also rose for the first time in many years,” said Stuart Jackson, chairman, TyreSafe.

“It really does reinforce the need for drivers to regularly inspect their tyres to make sure they are safe and legal. October’s tyre safety month is the perfect opportunity to carry out some basic tyre checks and help put a stop to this needless loss of life.”

The Royal Society for the Prevention of Accidents (RoSPA) is urging greater collaboration with Government on road safety following the publication of annual casualty figures which show the first increase in road deaths since 2003.

Kevin Clinton, head of road safety at RoSPA, said: "These figures must be taken as an opportunity to revise the way we work to make roads safer.

"It is a chance for road safety professionals and the new ministerial team at the Department for Transport to come together and discuss the way forward.

"While we appreciate that the Government has tough funding decisions to make, we must now do more to arrest and reverse the number of people being killed or hurt on our roads.

"Now is the time to drop the proposal to increase the motorway speed limit to 80mph, and the decision not to set casualty reduction targets in the Government's ‘Strategic Framework for Road Safety'.

“The drink-drive limit should be lowered from 80mg of alcohol per 100ml of blood to 50mg – in-line with the proposed changes in Scotland & Northern Ireland - and Government, the insurance industry and road safety bodies should work together to make the best use of black box technology in vehicles, especially to help young drivers and at-work drivers."