Audi ditches front-wheel drive for A8 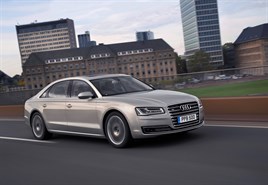 The revised Audi A8 will offer a Quattro-only line-up as improvements in engine efficiency reduce emissions.

Future versions of the top car built by the German firm will be supplied only with four wheel drive, Fleet News can reveal.

“Our Quattro traction system has set us apart from our rivals and it no longer makes sense for us to offer an inferior alternative in this premium segment,” said Audi AG spokesman Julian Kenz.

“When it becomes available next year, our latest A8 will set fresh standards with a more dynamic appearance backed by meticulous detailing and hand-crafted interiors. It’s a package that calls for the best in driving performance that can only be achieved with all-round traction,” he said.

Introduced only two years ago on examples of the car powered by 3.0-litre TDI engines, the front-drive system offered higher economy of 47.1mpg and a reduced emissions figure of 158g/km.

“These variants were developed as part of our response to the economic turndown,” said Kenz. "But the system was felt to lack the traction expected by our customers in some situations and sales volumes never reached what we regarded as successful levels in any market across Europe.

“Since then, the work we’ve completed on the next version of the diesel engine has produced gains of more than eight per cent in economy and emissions to give the new all-drive cars even lower running costs."

Priced from £58,800, the new cars are now available to order with deliveries expected to start in January.