A Fuel-Efficient Fleet with Zero Carbon Emissions: Impossible or a plausible future scenario? 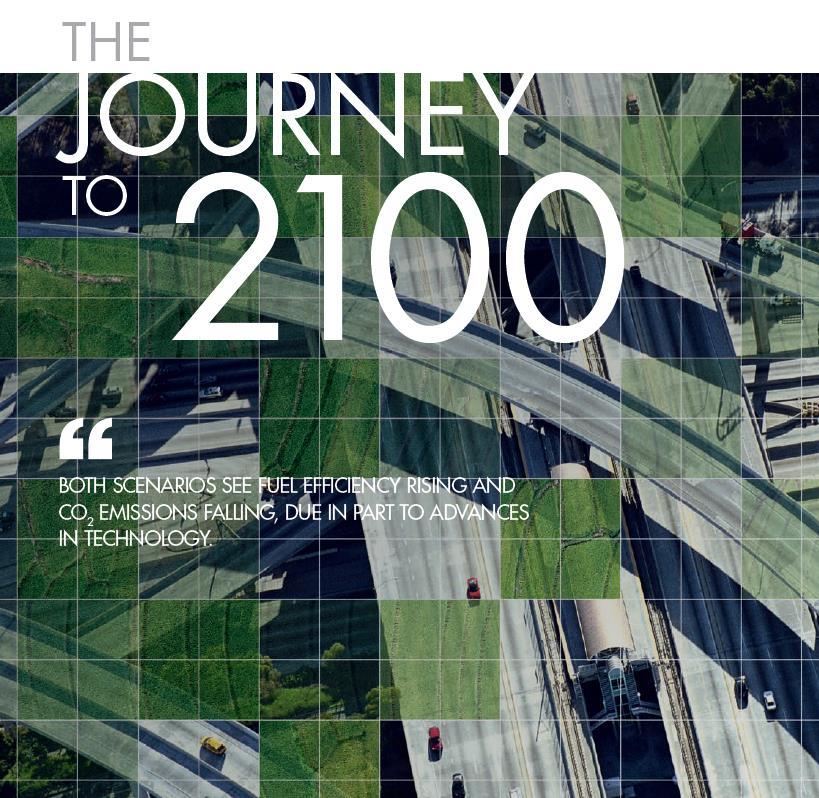 In 2010, passenger cars in the UK were driven more than 380 billion kilometres using petrol or diesel, while freight vehicles covered 174 billion tonne-kilometres.

That’s a lot of driving and a lot of fuel, despite fuel economy sitting at the top of the agenda for fleet and haulage firm managers in a bid to keep costs down and comply with government carbon emission policy.

The Climate Change Act of 2008 set the UK a target of an 80% reduction below 1990 levels for carbon emissions by 2050. Yet Shell analysts predict that demand for freight transport could rise by at least 80% by then. Making sense of current socio-political, economic and environmental trends, and combining that understanding with far-reaching research and analysis to project where society could end up in the future, is at the nub of a new piece of work from Shell called New Lens Scenarios.

“The future is neither completely predictable nor completely random,” says Jeremy Bentham,
Vice-President, Environment, Head of Shell Scenarios.  “The scenarios aim to be thought provoking yet plausible, highlighting matters already in the foreground and also, crucially, background developments that should be brought to the fore. 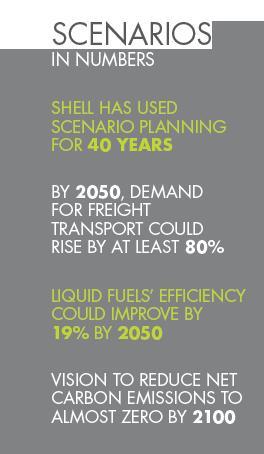 Jeremy and his team present two possible ‘futures’, Mountains and Oceans, which are outlined in the New Lens Scenarios.

The Mountains scenario predicts a strong role for government and the introduction of firm and far-reaching policy measures. These help to develop more compact cities and transform the global transport network. New policies unlock plentiful natural gas resources – making it the largest global energy source by the 2030s – and accelerate carbon capture and storage technology, supporting a cleaner energy system.

Market forces rather than policies shape the energy system: oil and coal remain part of the energy mix but renewable energy also grows. By the 2070s solar becomes the world’s largest energy source.

Some of the UK-specific research carried out as part of the scenarios work makes for interesting reading. In Mountains, demand for freight transport is predicted to increase by 80% by mid-century, whereas in Oceans it is predicted to rise by 86%.

Removing petrol and diesel entirely from the road transport network is a colossal undertaking, and while oil reserves remain fruitful it’s clear that those fuels will remain a popular choice.

In both scenarios, the projected demand for liquid hydrocarbon fuel rises until 2030; beyond that it plateaus in Mountains and continues to rise sharply in Oceans.

It’s a different outlook for passenger vehicles in the UK, as liquid natural gas (LNG), hydrogen and electricity become part of the mix for fuelling cars. The Mountains scenario for example suggests that by 2050, almost 270 billion kilometres in journeys annually will be powered by electricity.

Both scenarios see fuel efficiency rising and CO2 emissions falling, due in part to advances in technology and the use of hybrid vehicles. Also, fuel economy for liquid fuels improves by 19% by 2050 and, because of the increasing use of other alternative fuels, carbon emissions in g/ CO2 per tonne-kilometre fall by 34% in Mountains and 22% in Oceans between 2010 and 2050. The global vision in both scenarios is almost zero net carbon emissions by 2100.

Ultimately, the New Lens Scenarios give leaders within Shell, and those outside it, the chance to work on tomorrow’s problems today. And for transport businesses in the UK it offers a fascinating insight into the future of their industry.