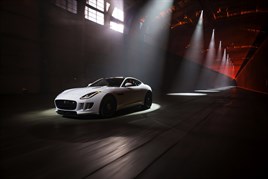 The new Jaguar F-TYPE Coupe was simultaneously unwrapped at both the LA and Tokyo motor shows this week.

The Coupe will be launched in the middle of next year and will share the same V8 and V6 engines as the Cabriolet which took to the road earlier this year.

As well as a change of bodystyle, the Coupe will also differ from the Cabriolet with the introduction of higher performance R model powered by a 550hp version of the V8 with 0-60 acceleration of just four seconds.

Chief designer Al Whelan said that the R version will get an enhanced interior specification with more stitching detail and a carbon fibre effect centre console. Otherwise Coupe models share pretty much the same interior as the Cabriolet apart from the additional rear bulkhead and parcel tray.

Whelan added that the Coupe remains fairly close to the C-X16 concept seen at the Frankfurt Motor Show. "There have obviously been a few changes to get the car production ready but what we have achieved is a car that's stiffer and faster."

One thing that had to go, he said, was the sideways-opening rear hatch. "This came from the original E-Type but when we looked at the concept rationally, and at what customers want, we ended up with the conventional uplifting hatch door but I don't think this has reduced the impact. The car looks stunning from the rear.

"We have worked hard with the engineers to get as much space as possible in the load area and pocket out every millimetre of space. Officially there is 407-litres of space, certainly enough space to get in two sets of golf clubs."