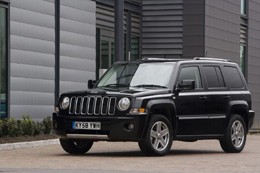 The Jeep Patriot has taken first place in Glass’s league of fastest selling cars for November, taking an average of 25.6 days to sell.

This month’s top 10 also included six crossover/SUVs, confirming the current popularity of these types of vehicles.

Rupert Pontin, chief car editor at Glass’s, said: “Jeep has done exceptionally well this month – moving up from fifth position last month – a clear sign of the popularity of this car, and the fact that it is value for money and in short supply.

“The number of 4x4 models at the top of the league is no surprise for this time of year. In fact they have largely remained popular throughout the entire year, despite a great summer and relatively mild weather conditions for early winter.”

The Audi A1 in second place re-affirms its strong position in the market.

Pontin continued: “On the whole, this month’s top ten is made up of cars from niche markets rather than run of the mill mainstream models from mass market sectors.

"It’s a sign of the times really, there is an increasing trend for buyers to want to be different and stand out, and they are choosing cars that help them to do this. It’s a pattern I think we will see more and more as we move into next year.”

Looking at the worst performers it’s another poor month for Mercedes-Benz, who has three models in the slowest selling rankings, with the R-Class coming very bottom and taking an average of 140.4 days to sell.

“I’m surprised to see the R-Class at the bottom of the league, it’s a very competent car and until now has had a good following,” said Pontin. “I suspect this pattern could be a volume issue, combined with the fact it’s an expensive car to run.

“The slow performance of the E-Class and SL-Class is also a volume issue – there are a lot of these cars in the market and even more being pushed into the new car sector. With volumes sure to increase over the next 18 months a market needs to be created or the price may need to be reduced to make it attractive.”

The rest of the 10 slowest selling cars are a bit of a mixed bag according to Pontin: “Three convertibles is not a surprise, especially with the MG as it is unreliable and there are plenty of them around. The Golf is a surprise however, as it’s an excellent all weather car and usually sells well all year round.

“The Mitsubishi ASX is also an unexpected visitor. Volumes are quite low and demand has been reported as quite high especially as it is a niche model. I expect this to be a blip and brief entry into the bottom 10.”