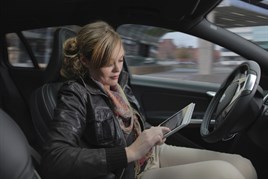 Volvo Cars will play a leading role in the world’s first large-scale autonomous driving pilot project in which 100 self-driving Volvo cars will use public roads in everyday driving conditions around the Swedish city of Gothenburg.

The aim is to pinpoint the societal benefits of autonomous driving and position Sweden and Volvo Cars as leaders in the development of future mobility.

"Autonomous vehicles are an integrated part of Volvo Cars’ as well as the Swedish government’s vision of zero traffic fatalities,” says Håkan Samuelsson, president and CEO of Volvo Car Group. "This public pilot represents an important step towards this goal. It will give us an insight into the technological challenges at the same time as we get valuable feedback from real customers driving on public roads."

The pilot will involve self-driving cars using approximately 30 miles of selected roads in and around Gothenburg. These roads are typical commuter arteries and include motorway conditions and frequent queues.

"Our aim is for the car to be able to handle all possible traffic scenarios by itself, including leaving the traffic flow and finding a safe ‘harbour’ if the driver for any reason is unable to regain control," explains Erik Coelingh, technical specialist at Volvo Car Group.

The ‘Drive Me’ project will focus on a number of areas, such as:

The project will commence in 2014 with customer research and technology development, as well as the development of a user interface and cloud functionality. The first cars are expected to be on the roads in Gothenburg by 2017.

"The public pilot will provide us with a valuable insight into the societal benefits of making autonomous vehicles a natural part of the traffic environment,” says Coelingh.
!Smart vehicles are part of the solution, but a broad societal approach is also necessary to offer sustainable personal mobility in the future. We believe that this cross-functional co-operation can give this development a boost."

The project also includes fully automated parking, without a driver in the car. This allows the driver to walk away from the car at the parking entrance while the vehicle finds a vacant spot and parks by itself.

“Our approach is based on the principle that autonomously driven cars must be able to move safely in environments with non-autonomous vehicles and unprotected road users,” says Coelingh.