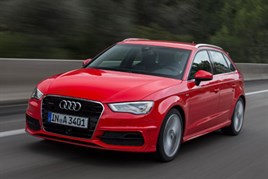 Audi has reduced its model variants by almost a third as part of a move to simplify its trim levels to remove confusion for fleets, dealers and pricing guides.

The project, which was completed at the end of 2012, has seen the near-700 derivatives cut to fewer than 500 across the model line-up, with the least popular trims dropped. Around 80% of registrations came from just 20% of derivatives and, consequently, each model will now have three to four basic trim levels.

Audi hopes the move will improve residual value accuracy by leasing companies and pricing guides, which will result in its models having more competitive leasing rates.

New head of fleet James Douglas has highlighted leasing companies and end-user fleets as the primary opportunities for growth over the next 12-24 months.

Last year saw the company overtake BMW as the largest seller in the true fleet sector with 40,975 registrations. Together with a planned rise in rental volume, Audi saw total fleet sales rise by 2.2% to 66,788.

“Rental was largely driven by the run-out of the A3,” said Douglas. “It’s all on central buyback. We have locked down the remarketing plan and built it with the network so there is no risk. We will do less rental this year than in 2012.”

He added: “We are top of the premium pile in true fleet and we have an obligation to hold onto that position. My remit is to increase our sales in each product segment and in each segment in true fleet.”

The twin tactics driving this strategy are strengthening relationships with leasing companies at senior management, sales and aftersales level, and moving closer to end- user fleets.

Manufacturers introducing plans to engage directly with fleet decision-makers have sometimes come into conflict with leasing companies that wish to retain control over who they believe is their customer.

“Is the fleet the leasing company’s, the dealer’s or the manufacturer’s customer?” asks Douglas, rhetorically.

“Ultimately, we are all supplying the customer and we need balance to be successful. We want to be part of a tripartite relationship with the leasing company and the end-user customer.”

Douglas moved to his new position at Audi in November 2012, vacating a similar position at Nissan. He claims he always wanted to work for the Volkswagen Group, offering the following by way of part-explanation.

“Take, as an example, the turnaround of Skoda. had the ability and was prepared to take on such a task that was long-term. It needed vision and the financial background to take on the risk but also to have the strategy which meant it wasn’t a risk.”

Douglas was just one of eight changes in head of fleet positions at manufacturers over the past 12 months in arguably the biggest year of reshuffling ever seen.

The latest announcement concerns Skoda head of fleet Martin Burke, who takes up a new role this month as head of customer quality for Volkswagen Group UK, covering the four main brands of Audi, Seat, Skoda and Volkswagen.

The new A3 Sportback, available from March, offers a growth opportunity for petrol sales in the fleet sector, according to James Douglas, thanks to the 109g/km CO2 emissions of the 1.4 TFSI engine.

The fuel comparison tool on Audi’s revamped fleet website shows that the financial cut-off point between petrol and diesel can be as high as 15,000 miles a year.

Douglas believes demand for the Sportback could exceed demand this year.

“We have enough volume to achieve our business plan but it’s hard to get additional supply, though we have a fall-back plan if demand is greater than we expect.”