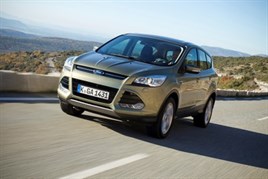 Ford  has won three out of a possible seven 2012 Euro NCAP best-in-class safety awards - more than any other manufacturer - with wins for new Kuga, new Transit Custom and new B-MAX.

New Kuga topped the SUV sector, Transit Custom triumphed in the Business and Family Vans class, and B-MAX was the joint winner in the small MPV category.

New Kuga achieved a score of 88% for overall protection, the highest-ever rating for a mid-sized SUV.

New Transit Custom achieved 77% for overall protection after becoming the first vehicle in its class to earn a five-star Euro NCAP rating that also applies to the new Tourneo Custom people mover.

Ranger is the first and only pickup to achieve a five-star rating.

Last year, Ford also became the first car manufacturer to achieve a total of seven different Euro NCAP Advanced rewards in recognition of a wide range of technologies that Ford has introduced across a number of vehicles.