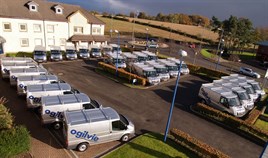 Ogilvie Group, the Stirling-headquartered, family-owned business that also includes construction, communications, house building and surveying among its portfolio of business activities, delivered pre-tax profits unchanged at £2.7 million on turnover marginally down to £160 million for the 12 months to June 30, 2012 from £162.7 million in 2011.

Ogilvie Fleet, which operates an expanding fleet now approaching 11,000 company cars and vans putting it among Britain’s 20 largest contract hire and leasing companies, was the strongest performer among the Group’s divisions, with turnover accelerating to £104.8 million (2011: £97.7 million) and operating profit rising to £2.5 million (2011: £2.1 million).

Although the financials relate to the 12 months ending June 30 last year, Ogilvie Fleet has seen further UK-wide expansion in 2012/13 based on a continuing focus on multi award-winning customer service and the introduction of innovative vehicle leasing and fleet management solutions.

Earlier this year Ogilvie Fleet announced that its move into Northern Ireland with an office in Belfast - the division also has offices in Birmingham and Sheffield as well as in Stirling - was expected to result in a tripling of the size of its fleet in the province to 3,000 units over the coming years.

Ogilvie Fleet sales and marketing director Nick Hardy said: "Fleet is going from strength to strength. We’ve had had a fantastic first six months in 2012/13 and will undoubtedly increase profits from last year.

"A combination of industry leading products, unique online tools, best-in-class customer service that has been recognised with a string of independent industry awards and client partnership transparency are all helping the business both expand and, critically, ensure existing customers are retained."