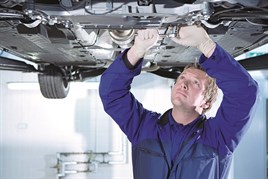 Thousands of cars could be facing an MOT failure from today (March 20) as tough new test standards come into effect, says the AA.

Andy Smith, AA patrol of the year, says: “If you’ve been happily ignoring a warning light because it’s not part of the MOT, these changes mean your car could now be on the MOT scrap heap or you’ll need to fork out on expensive repairs.

“While it could have expensive consequences for someone running an old car on a tight budget, these changes are long overdue as airbags, for example, have been widely fitted since the mid-nineties. It’s important that these systems remain safe and effective throughout the life of the vehicle.”

The new testable components have been included since last year (January 1, 2012) but on an advisory only basis but will now become fail items where defects are found.