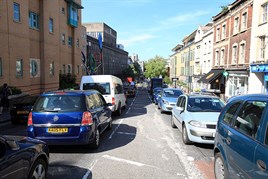 Overall motorists in the UK spent less time in traffic than fellow drivers in Germany, France and the Netherlands and a massive 30 hours less than travellers in Europe’s most congested country Belgium.

Traffic patterns in 2013 continue on a downward spiral, with Q1 of 2013 showing a further 23% decline in European congestion, with drivers across Europe spending 27 hours combined less in traffic compared to the same time last year suggesting that the EU economy could be facing another tough year.

According to the INRIX Index, Europe’s Worst Countries for Traffic Congestion in 2012 were:

“There has always been strong correlation between the state of the economy and the level of traffic congestion on our roads,” said Bryan Mistele, CEO, INRIX.

“It tells us if people are employed and driving to work, going out to eat or doing some shopping, as well as whether or not businesses are shipping products.

UK City Snapshot: Looking Back at 2012

The UK capital, London, has moved up the European traffic congestion ranks to become the third most congested city in Europe in 2012.

Even with the jump in European rankings, all 18 UK cities analysed showed declines in traffic congestion throughout the year indicative of the impact of rising unemployment and fuel prices combined with declines in consumer spending.

Drivers in London spent a full three days of 2012 sitting in traffic, that’s over a day more than the UK’s second most congested city Manchester, where drivers spent 45 hours in congestion.

However even in London traffic levels continues to drop, with congestion down 9% year on year. In Belfast traffic dropped 20% and the city moved down the UK rankings from 4th to 6th place.