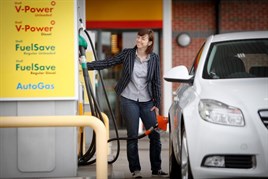 UK motorists are being overlooked by car makers with not one offering an LPG variant in their range, according to LPG supplier Autogas.

Currently, cars powered by autogas LPG are available directly from the showroom of more than 20 different vehicle manufacturers in Europe, offering drivers savings of up to 40% on their annual fuel bill

“Millions of drivers on the continent are able to take advantage of the lower price of autogas LPG as they have the opportunity to buy an LPG bi-fuel car directly from the showroom,” said Linda Gomersall, general manager, Autogas Limited.

“Sadly though, hard pressed families and businesses in the UK simply don’t have that choice as manufacturers continue to overlook them, offering just petrol, diesel or electric models.”

Due to its better environmental credentials when compared with petrol and diesel, autogas LPG attracts less duty from the Government and means drivers can typically slash their fuel bills by up to 40%.

The current average prices per litre in the UK for petrol and diesel are 134.80p and 139.29p whereas LPG is significantly less at just 74.36p.

Currently some 160,000 vehicles in the UK are powered to run on autogas LPG with an estimated 12,000 cars being converted in the aftermarket each year to run on the cheaper, cleaner fuel.

Loyalty among users is high with 97% stating in a recent Autogas Limited survey that they expect to replace their car with another LPG model next time they change their car.

“Vehicle manufacturers continue to invest millions of pounds each year in the development of electric and hybrid models yet they still haven’t given UK drivers the choice of their full ranges being offered elsewhere,” continued Gomersall.

“By offering these vehicles here, drivers would be able to benefit from reduced running costs, the impact to the environment would be reduced and manufacturers could sell more cars.”