Temperatures dropped below seven degrees Celsius (the temperature at which cold weather tyres are most effective) during prime commuting hours on 173 separate days between October 1, 2012 and March 31, 2013, according to ATS Euromaster.

The figures cover temperatures in 10 major UK cities from 7am to 9am and 4pm to 6pm.

The detailed weather analysis also revealed that parts of the UK were covered under a blanket of snow for 44 separate days during the six month period.

ATS Euromaster says that the figures, which it commissions annually from the Met Office, highlight the importance of fitting cold weather tyres, as they offer improved grip, handling, cornering and reduced braking distances when the temperature drops below seven degrees Celsius, which it did for 95% of the six months measured.

Peter Fairlie, group sales director at ATS Euromaster, said: “The UK faced one of the coldest winters in recent years and driving conditions have been treacherous for many motorists travelling on roads covered in ice and snow.

“In fact the UK only experienced nine days out of the whole six month period where cold weather tyres wouldn’t have made driving safer in at least one of the 10 major cities we studied.

“For winter 2012/2013 ATS Euromaster ordered in excess of £10 million worth of cold weather tyres – 60% more than the previous year, and we have seen strong demand for these tyres, proving how valuable they are at helping motorists keep safe when it is cold and in adverse weather conditions.”

Of the 10 cities analysed, Newcastle upon Tyne recorded the highest number of days when commuter time temperatures dipped below seven degrees Celsius with 162, compared to the 129 reported in ATS's 2011/2012 winter weather study.

Aberdeen had the second highest number with 159 days, 41 days more than last year.

London was the city with the fewest days, with 120, but still accounting for 66% of the six month period.

Newcastle was also the city with the deepest level of snowfall, with 25cm being recorded on  January 26, 2013, while Aberdeen had 12 days of consecutive snow covering in January 2013.

The month with the highest average number of days recorded below seven degrees Celsius during prime commuting times was March 2013, with 30 days.

December 2012 was the second highest with 27 days, while October was the lowest with 15 days, but still more than double the number 12 months earlier.

ATS Euromaster launched its cold weather tyre service in April 2010, and take-up of the seasonal tyres has continued to grow among retail customers and fleets.

Fairlie said: “It’s now the exception, rather than the norm, to find a supermarket home delivery or ‘blue light’ fleet not fitting cold weather tyres to the majority of its vehicles.

"These organisations have led the market in becoming early-adopters, closely followed by utilities fleets and other businesses and individuals which can’t afford for vehicles to be parked up during a harsh winter.

“A lot of customers were sceptical about changing tyres at first, but the frequency with which we are having harsh winters reinforces the safety and mobility benefits, and explains why take-up is increasing every year.

“Detailed temperature analysis like this also illustrates why cold weather tyres are beneficial from early October through until late March, and not just when the roads are icy or covered in slush and snow.” 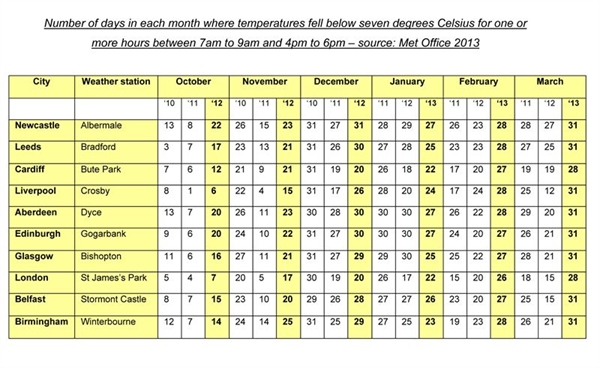