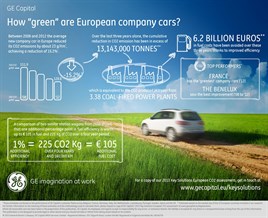 New company cars across Europe’s major markets reduced their CO2 emissions by 15.2% between 2008 and 2012, according to the Key Solutions CO2 assessment published today by GE Capital.

The report analysed the reduction in CO2 emissions from new company cars in 11 European countries between 2008 and 2012. Extrapolating the figures out, the report estimates that the cumulative reduction achieved between 2010 and 2012 is in excess of 13,143,000 tonnes – more than the CO2 produced by a coal-fired power plant over three years.

The Key Solutions team - the specialist fleet consultancy unit of GE Capital – estimates that had fuel efficiency remained at 2009 levels, the fleet sector would have incurred an additional fuel cost of more than 6.2 billion Euros between 2010 and 2012.

Alex Barbereau, EU accounts and consultancy director, GE Capital, said: “Our research shows a continued reduction in the CO2 emissions from company cars across Europe. This is reflective of the improved fuel efficiency of new vehicles and, also, an on-going focus on greener car policies.

“However, when our previous European CO2 assessment was published in 2011, fuel accounted for 21 per cent of the Total Cost Ownership and today this figure stands at 26 per cent. Therefore, fleet managers have both an environmental and commercial incentive to achieve further reductions.”