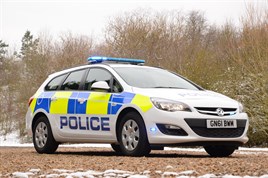 A hi-tech police car concept developed in the UK by a consortium of companies led by General Motors has begun to generate global interest.

Police forces in Sweden and Germany have shown an interest in the vehicle, and it has also led to dialogue with the interior ministry of an African state.

ACPO ITS invited suppliers to use a range of devices and applications that will support and assist officers in the future as well as develop new concepts and ways of working to capture evidence and information quickly and easily from the scene of a crime or incident and share it with other staff via a back office.

A year after winning the ACPO ITS competition with an Ampera, the consortium led by Vauxhall has repeated its success with the latest technology fitted to an Astra Sports Tourer – a vehicle already used in large numbers by police forces.

The car has been developed in the UK, using a British-built Astra, and prepared for police use at facilities at Millbrook in Bedfordshire. It is single vehicle architecture compliant, and some of the technology is designed to work away from the vehicle as well as inside it.

Mick Trosh, strategic research, development and innovation manager at ACPO ITS, said: “It’s about using a vehicle as a communication hub to ensure people are well informed about what’s going on. It’s also about saving cost and improving safety for officers.”

The technology allows officers to spend more time in the field and less time completing reports at police stations. For example, the vehicle can be fitted with a ‘ruggedised’ dockable PC which can be used to make notes at a scene and file them when the officer returns to a vehicle.

Although designed as a complete package for police use, the car could be ordered only with some of the technology fitted, depending on the requirements of individual forces, and Vauxhall suggested some of the equipment could be of interest to other fleets.

Dick Ellam, Vauxhall special vehicles manager, said: “For security firms that have officers on patrols at various sites that might be unsafe it would allow them to remain within the vehicle and use equipment to record findings, and there might be other applications outside police fleets for the technology.”

Trosh added: “Yellow light fleets such as the Highways agency or vehicle rescue and recovery companies could also benefit from some of the technology.”

Ellam added that with telematics equipment recording vehicle and driver behaviour, police fleets would be able to monitor whether vehicles were being driven well when not responding to a blue-light call and decide whether drivers needed coaching that would reduce fuel costs as well as wear on the vehicle.

“Collectively, police forces use more fuel than anyone else in the UK, and even small changes in this area could result in significant savings,” he said.