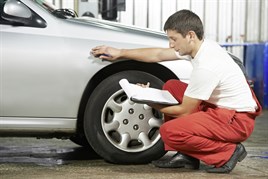 Employers need to ensure that damage recharge policies are watertight and well-drafted if they are to successfully claw back cash from their staff.

The warning comes in the wake of a recent case involving an employee who complained money was unfairly deducted from his wages to pay for damage to his company car.

Halsall Mechanical alleged that the vehicle driven by Simon Wright had body and paintwork damage, while the inside of the vehicle needed a full valet.

But after deducting an undisclosed sum to cover the costs involved in repairing and cleaning the vehicle, Wright launched a compensation claim for breach of contract and for the unauthorised deduction of wages.

The case against his Cannock-based employers was heard at Birmingham Employment Tribunal, where Wright defended the state of his company car.

During cross-examination about the inside of his vehicle, he said: “I’m not surprised – I had been taking rubbish to the tip.”

The boiler installation firm opposed his compensation claims and said the deductions were consistent with the terms of his contract.

Wright, who was said to have used the car for three years, denied its condition was as bad as claimed by the company.

He admitted there were “gouges”, but said its condition had been caused by wear and tear.

However, tribunal judge Karen Hindmarsh said that, according to Halsall’s terms of employment, it was entitled to deduct money from wages to pay for any damage caused to a company car.

As a result she told Wright that his compensation claims for breach of contract and the unauthorised deduction of wages had failed.

Natalie Saunders, specialist employment law solicitor and founder of Pharos Legal, told Fleet News that the case did not establish any new principles of law.

She said: “What the case does is remind employers how helpful it can be to have a bespoke employment contract, which includes a well-drafted lawful deductions clause that addresses a range of scenarios that is relevant to the employer’s business.”

Typically employers will want to be able to make deductions from wages to cover costs incurred for repairs caused by negligent, deliberate or even just careless damage to a company vehicle.

Saunders said: “Other company property should not be overlooked, such as laptops and smartphones that have drinks spilled over them in the pub or get left in the rain or at the train station for example.

“I would also recommend specifically dealing with deductions in respect of fines or penalties incurred while driving a company car.

“A well-drafted employment contract is really valuable in situations such as this, as the case highlights.”

BCA, which operates a 400-strong car fleet, introduced a damage recharge policy in 2011 to help control the cost of damage.

BCA’s fleet manager Marie Jarrold said: “Our human resources team and managers recruiting locally know they should inform drivers of the relevant fleet policy at the point of employment.

“We also have a legal team based at our Farnham centre, who we seek advice and guidance from with relation to legislation changes and potential effects on our company
car policy.”

Drivers are directed to the fleet policy when they are employed with the company and all receive a car pack with a driver handbook.

Jarrold said: “We always consult with the finance director and human resources before we implement any policy changes.

“It is important that everyone is kept in the loop.”

Paula Maxwell, car fleet manager at housing provider Longhurst Group, made it a priority to implement a damage recharge policy after being appointed in 2011.

The organisation, which has a fleet of 158 cars, asks its employees to pay a proportion of the excess on their insurance policy following the first own-fault accident.

Maxwell said: “We work closely with our HR department to ensure fleet policies are established from the start.

“If a new employee is going to be driving a company vehicle or their own vehicle on company business, HR will write a clause into their condition of employment stating they have to sign and adhere to the vehicle policy.”

All drivers also have to sign a declaration to confirm they have read and understood the company car or grey fleet driver handbook.

There are additional practical steps employers should be taking where a car is shared between staff.

Saunders said: “It’s important to include a provision emphasising that if damage is found which has not been reported, there is a risk that they will be found liable and appropriate deductions made from their wages.

“This provision should ensure that employees can be correctly held responsible for what they have done but not for damage caused while a colleague had the car.

“It would be useful to dovetail that sort of requirement with a detailed list in the staff handbook of behaviours that constitute gross misconduct, and failing to disclose damage caused would form part of that list.”