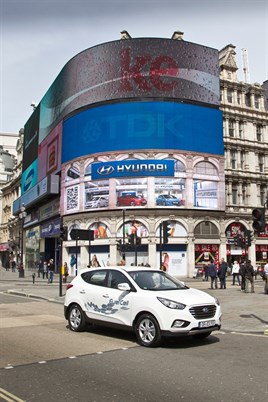 Hyundai Motor, as a supplier to the LHNE project, will join the existing consortium of companies with expertise in hydrogen transport infrastructure and operation, working to establish the UK’s first hydrogen transport network covering London and south east England.

The LHNE project, a government-backed initiative co-funded by the Technology Strategy Board, will put hydrogen-fuelled vehicles into daily business use and deliver the refuelling infrastructure to support their operation.

These fuel cell vehicles will be leased to key public and private fleet users in the capital. They are among the first of 1,000 examples that Hyundai has committed to produce between now and 2015 and are built on the same production line, in Ulsan, Korea, as the Tucson.

The majority of those 1,000 cars will be available in Europe where the European Commission has established a number of schemes, such as the Fuel Cells and Hydrogen Joint Undertaking (FCH JU), to promote the use of hydrogen as an energy carrier with zero carbon content.

"Battery electric vehicles are a great technology but like the fax machine they are only temporary and there is a great deal of consumer resistance towards them for all manner of reasons, including range and the time it takes to recharge them.

"Even though we have around 1,300 charging points in the capital you cannot guarantee getting a space outside your house to charge overnight: London is just too densely populated."