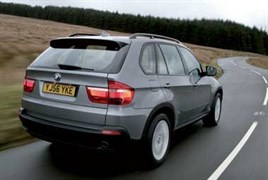 The BMW X5 remains a favourite among car thieves, according to vehicle recovery experts Tracker.

Last year the company recovered over £12.5 million worth of stolen vehicles – most popular of which was the X5, for a second year in a row.

The second most recovered vehicle was the Range Rover, a shift from seventh place in 2011.

Back in 2011, BMWs occupied the top three spots, with the 1 Series and 3 Series taking second and third places, respectively. Today, the BMW 3 Series is in equal fourth with the Audi RS4, while the 1 Series has slipped out of the top 10 completely. Mercedes was a key target for thieves in 2012, with the SLK and ML in fifth and sixth place, followed by the CLS and E Class in joint seventh.

Police liaison officer for Tracker, Stuart Chapman, said: “It’s clear from our latest figures that thieves continue to target prestige models with the most expensive car recovered being worth £70,000. The average value of the cars we recovered in 2012 was just £25,500 and a number were below £5,000, confirming that you don’t have to own a luxury car to be at risk from thieves looking to make a fast profit."

Tracker stolen vehicle recovery systems work like an electronic homing device. A covert transmitter is hidden in one of several dozen places around the vehicle.