Third of drivers at risk of fines, says AA 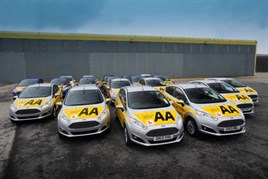 Almost a third of drivers are at risk of getting one of the new fixed penalty notices for careless driving, which come into force on Friday, August 16<sup>th</sup>, the AA has warned.

AA/Populus research has shown that nearly a third (29%) of drivers admit to being middle lane hogs, just one of the habits that can be tackled under the new notices. Young drivers were the most likely to admit to this habit, with four in ten (41%) saying they tend to stick in lane two on a motorway in moderate, free-flowing traffic. The least likely age group to say they stay in the middle lane were 45-to-54-year-olds (26%).

Young drivers were also least likely to be able to correctly identify lane 1 as the "cruising lane", with just 17% doing so correctly. One in ten 18-to-24-year-olds (9%) thought this lane was the "lorry lane" and 5% thought it was the &lsquo;acceleration / deceleration lane". Regionally, London drivers are most likely to say they are middle lane hogs (38%), and the least likely are those in Yorkshire and Humberside (24%). Drivers in London were also most likely to say they tend to stick in lane 3 (7%); the least likely were drivers in Northern Ireland (2%) and Scotland (2%). This confusion over correct motorway etiquette is perhaps unsurprising given half of drivers (51%) taught themselves to drive on motorways. And only 1 in 10 (10%) said they had a motorway lesson with their driving instructor after passing their test.

The AA Charitable Trust is funding free Drive Confident courses given by AA Driving School instructors. The two hour courses can be used by drivers to help combat any area of their driving they feel needs work.

Edmund King, director of the AA Charitable Trust, said:"We are pleased to see that at long last new powers and fines will be given to the police to tackle the top three pet hates of drivers &ndash; tailgaters, mobile phone abusers and middle lane hogs. "It is worrying that three quarters of drivers see others using mobile phones behind the wheel on some or most journeys. "This epidemic of hand held mobile phone use while driving has already cost lives and our members have demanded action. An increase in the standard motoring fixed penalty fine will help deter those who commit motoring offences including mobile phone use.

AA members broadly support an increase in the level of the fixed penalty. Our members also fully support educational training as an alternative to penalty points.

Driving on the motorway is not currently allowed until you have passed your driving test. But allowing learners on these roads is one of the proposals being considered in the Government's green paper on young driver safety, due out this autumn.

Jim Kirkwood, managing director of the AA Driving School, said:"We support the idea to allow learners on motorways under the guidance of a qualified instructor. "Learning the correct way to drive on motorways is key to keeping you safe on these roads. It will also help ensure new drivers do not fall foul of the new fines."