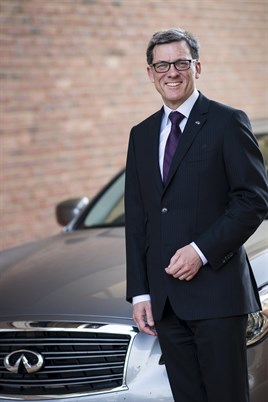 Infiniti’s new boss says the Japanese premium brand is ready to step on the gas to make inroads into the fleet market with its new diesel saloon.

The new model will go up against the Audi A4 and BMW 3 Series with CO2 emissions from 115g/km (auto:
125g/km), and could be pitched to fleets as part of a suite of Nissan models. A high-performance petrol-electric hybrid variant will follow.

But Infiniti also stresses that although the new Q50 will be the brand’s most popular model and will double existing sales, it is starting from a low base.

Steve Oliver (pictured), regional director for Infiniti North Europe, told Fleet News: “There will be a particular focus on the fleet market, but we need to manage it carefully and ensure our growth is sustainable. We’re very excited, as 65-70% of this sector is fleet, and being part of the Renault Nissan Alliance will help us.

“Some other manufacturer groups don’t offer cars across multiple brands to fleets in this way. At the same time, we’re coming from a very low base so we won’t be selling cars in huge numbers.”

She said: “The Q50 is all about fleet. This vehicle does open up more of the market. It opens up chances to be on fleet policies where CO2 has always been restricted.

“Building the range is only a positive thing. Now we’re open to more markets and more drivers so it’s not just the chief executive that can have a vehicle, it’s also management and senior management.”

Another interesting development has sprung from its partnership with the Red Bull Racing Formula One team as title sponsor.

It means that he will be involved in engineering the driving dynamics of future products including a new compact car to be built in Sunderland from 2015.

Oliver added: “It’s a great opportunity for us to gain exposure with our involvement in Formula One and we want to maximise that. We’re taking a few fleet customers to the Italian Grand Prix at Monza.”

Infiniti currently has eight sales sites in the UK, expanding slowly since the first purpose-built facility opened in Reading in 2009. The plan is to have around 30 sales outlets in total over the next two years giving the brand greater visibility and coverage in key areas.

Oliver said: “We will be accelerating the development of our network. Cardiff and Bristol are high on the agenda as well as the north east – particularly with us starting car production there in the next couple of years.

“The Q50 will be a real breakthrough product for us. Some of the potential partners we’re talking to about sites and seeing new sites open encourages more partners to become involved with Infiniti.”

The company will soon open a site in St Albans, which won’t be a purpose-built Infiniti showroom, but a former Glyn Hopkin Nissan building.

The Nissan business has moved to a larger facility and Infiniti will sit alongside a Fiat Group Automobiles dealership, perhaps signifying a more pragmatic approach to growth than the original stand-alone establishments set up in the UK.

There is also a continued dialogue with leasing companies to ensure new products are understood.

Bishop said: “We’re working with the leasing companies. We’re educating them where Infiniti sits and our brand and our message. The leasing market is a great route to market.

“Leasing companies are quite happy to have a new player on board. It’s spreading some of the risk.

“Their books will have a lot of BMW, Mercedes-Benz, and Volkswagen products on them and we’ve seen a great response from the contract hire industry.”

Last year Infiniti introduced a lower price Business Edition variant in the M35h hybrid, featuring key equipment that company car drivers expect as standard, and it is likely Infiniti will do the same for the Q50 in the UK.

Bishop said: “The Q50 business editions will have everything the driver will expect, need and want.”