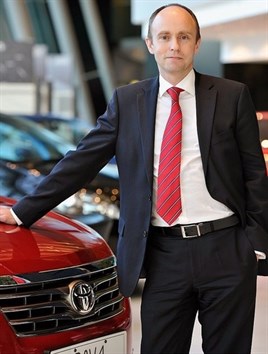 Toyota has announced the appointment of Matt Harrison as president and managing director of Toyota GB.

Harrison, who has been the company's commercial director since the start of 2011, takes up his new position on Monday (September 2), succeeding Jon Williams.

Williams has decided to take up a new role with a private Toyota distributor outside Europe after three years leading the business in the UK.

Harrison said: "I am delighted to be taking on this role at such an exciting time for both the Toyota and Lexus brands.

“We have a strategy to continue to grow both brands in the UK and I look forward to leading the team in the implementation of those plans."

In 2008, he was appointed director of Lexus Europe, before returning to Toyota GB in 2011 as its commercial director.

Born in Oldham, and raised in Lytham St. Annes, Lancashire, Harrison holds a BSc (Hons) degree in Financial Accounting from the University of Kingston upon Hull.

He is married with two children and in his spare time enjoys family life, squash and skiing.