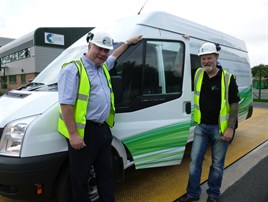 Driver behaviour technology is helping a specialist recycling company to lower carbon emissions and save money.

Celtic Recycling has invested in the Lightfoot in-cab system to improve fuel efficiency and safety in its fleet of 14 Renault Master vans. The Lightfoot system advises the driver on how to operate the van in the most fuel-efficient manner, by using real-time audio and visual aids in the cab. The technology is proven on average to deliver fuel consumption improvements of 15 per cent.

Peter O’Rourke, transport manager at Celtic Recycling, said: “Celtic Recycling is committed to reducing carbon emissions year on year. We looked at a wide range of options for our LCV fleet and decided that Ashwoods offered two technologies that really suited us.

“The Lightfoot system advises the driver on the optimum time to change gear and is making a real impact on fuel economy. We are now looking at introducing it to our HGV fleet.”

Lightfoot advises the driver on how to drive in a more efficient manner with the help of real time audio and visual aids. It also monitors performance and sends a simple email report to the fleet manager on a weekly or monthly basis.

The  Ashwoods Hybrid drive technology reduces fuel consumption and CO2 emissions by 15-25%. The system is entirely self-powered; it stores energy every time the vehicle slows down then transfers it to the wheels via an electric motor. Unlike other hybrids or electric vehicles, it never needs plugging into a charging point - and operators don’t have to worry about the battery going flat.

O’Rourke added: “The hybrid vehicles fit seamlessly into the fleet without requiring driver training or investment in charging infrastructure. We can just put them straight to work. Our long term goal is to switch our entire LCV fleet to hybrid.”

The company operates double cab in-vans, used to transport specialist crews to decommission and strip down transformers and other electrical heavy plant, for customers including National Grid and Western Power Distribution.