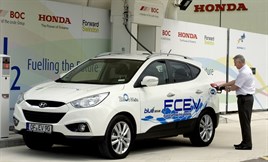 The elements needed for a hydrogen-fuelled future to become a reality in just two years are already being put in place, according to major stakeholders in the ‘greener’ fuel.

Hyundai is building production versions of the ix35 Hydrogen Fuel Cell Vehicle in limited numbers and other manufacturers are showcasing the technology, with a view to production within two years.

Fleets will be in the forefront of the initial trials and Hyundai is in discussion with a number of interested organisations.

Tony Whitehorn, president and CEO of Hyundai UK, said: “We’ve reached an important moment in history, and I’m reminded of the 1968 Olympic Games in Mexico City at the high jump when one individual – Dick Fosbury – tried jumping over the bar backwards, head first. It changed history and he literally raised the bar in the high jump competition.”

Whitehorn said that to succeed and gain a foothold in the market, there needed to be a common goal between three parties: vehicle manufacturers, those involved in infrastructure, and governments. He said a clear strategy with hydrogen fuel producers and growing enthusiasm among local authorities led by the office of the Mayor of London would help the new technology gain traction.

“Battery electric vehicles are a great technology but, like the fax machine, they are only temporary and there is a great deal of consumer resistance towards them for all manner of reasons, including range and the time it takes to recharge.

“Even though we have around 1,300 charging points in the capital you cannot guarantee getting a space outside your house to charge overnight: London is just too densely populated.

“For me, hydrogen cracks all those problems and it also solves other issues along the way, such as making best use of wind energy, for example. We also produce a huge amount of waste and we are looking at schemes that convert biomass into hydrogen. So as well as producing a clean fuel we would be reducing the amount of waste we put into landfill.

“These are early days, but I am tremendously excited by the prospects of London’s hydrogen future. Hyundai is providing invaluable insights and bringing global experience to the Mayor’s innovative low-carbon, low-emission transport activities.”

The UK is on course to have more than 60 public hydrogen refuelling points by 2015 and, according to Alex Stewart, of consultancy and management service provider Element Energy, with Toyota, Mercedes-Benz and Nissan among others also developing hydrogen fuel cell vehicles, it is estimated that there will be 10,000 on UK roads by 2020, and 1.6 million by 2030.

Stewart said one of the challenges to date has been that hydrogen has been treated as an industrial gas rather than as a transport fuel.

“Hydrogen has always been ’10 years away’ but never materialised,” he said. “But technology wasn’t ready a decade ago. There was no collaboration between car manufacturers and infrastructure providers and no commitment from policy makers.

“There are still challenges to overcome – a tough business case for filling stations to include hydrogen given the low utilisation in the short-term, and regulations need to be adapted for using hydrogen in vehicles.”

Some of the companies on board in the UK include Sainsbury’s and Morrisons, which should help to develop the
refuelling infrastructure at supermarket filling stations.

Stewart said the cost of running a hydrogen vehicle would be on a par with a diesel vehicle by 2025, while the cost of hydrogen fuel was on target to be less expensive than diesel, which currently costs about £8 per kg.

Hydrogen could be made by electrolysing water on site, most likely at night when electricity is cheaper, so fuel would not need to be transported.

Robin Hayles , product manager for the ix35 Fuel Cell Vehicle said that by 2015, Hyundai would be producing its fifth-generation fuel cell cars and would be offering the performance, space, comfort, range, refuelling and safety that drivers have become used to from internal combustion engine cars.