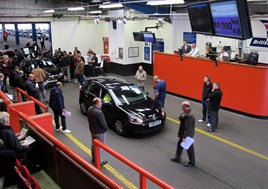 The average value of used cars sold at auction across increased from £4,862 to £4,899 during August according to the National Association of Motor Auctions (NAMA).

The total volume of sales rose 4% from 88,697 units to 92,255 units, driven by optimistic manufacturer, rental and dealer PX segments.

Transactional activity increased in August across all but the fleet age segment, although this could be as a result of the especially high growth in fleet volumes during July, reports NAMA.

Sales conversion rates increased for the second month in a row to 79%, with both fleet and dealer part-exchange segments now attaining 78%.  This robust performance puts the month at three percentage points higher than that achieved during August 2012.

Small changes in price amongst the segments appear to be correlated with changes in average age and mileage by segment.

Whilst manufacturer/rental and fleet age segments saw a reduction in both, these indicators for the dealer part-exchange segment rose slightly.

Whilst general market convertibles have increased in value over the past few months, August appears to have been a turning point as summer draws to a close and dealers become reluctant to buy anything, except the best examples.

By contrast, seasonality does not appear to have affected sales of 4x4s. Retail demand has remained buoyant, and this appears to be reflected in Augusts’ values with a small rise in average price of premium SUVs.

Justin Lane, NAMA chairman, said: “Retail activity was slightly ahead of expectations in August, which comes as a surprise considering the weather and peak holiday season.

“However it has been reported that the fine weather meant record numbers of UK residents holidayed at home this year and so car buying could well have received a boost from such a trend.

“The back to school trend has also offered some support to most traditional 4x4 and MPV vehicles and values have shown either stability or an upward trend.

“The onset of the inclement autumn and winter weather will as usual see additional support on 4x4s.

“Combined with dealer stock levels not being as high on such cars as in recent years, we expect to see values remain buoyant on much of this sector over the next 3-4 months.

“With the September plate change likely to see a strong set of new car numbers, it should not be forgotten that September is traditionally the second best used car month of the year.

“There is a likelihood that dealer stock levels will be in need of replenishment during September, and with the influx of part exchanges likely to add interest, conversion rates should remain strong.”