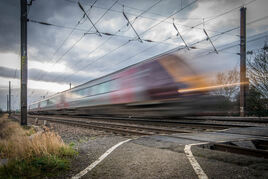 Government efforts to make it easier for people to choose greener ways of travelling to and from public transport hubs are working, according to a new progress report.

Transport Minister Baroness Kramer said: “The new year is an ideal time to join the increasing numbers of people who are choosing healthy, more environmentally-friendly methods of getting to work.

"Real life journeys on public transport tend to be more complicated than just a single trip on a train or three stops on the local bus. We want to make it as easy as possible for people to choose greener ways of getting between each mode of transport.

"Since we launched the Door-to-door strategy eight months ago, there have already been significant improvements to integrate public transport. This action plan highlights where progress has been made but there is still more to be done."

Examples of success include a £14 million investment in two new state-of-the-art bus interchanges at Rochdale and Mansfield, which have improved integration with rail, as well as making it easier and safer for people to use sustainable transport.

A £14.5 million investment in cycle facilities at railway stations has been the major enabler in doubling the amount of cycle parking spaces at stations in the lifetime of this Parliament.

This has contributed to the number of cycle-rail journeys increasing from 14 million in 2009 to an all time high of 39 million a year.

As more and more people take up cycling, the Government is determined to improve their safety and has committed twice the funding for cycling as the previous administration.

Last summer the Prime Minister announced plans for cycle-proofing roads so that all new Highways Agency trunk roads and improvement schemes will be designed with cyclists as well as motorists in mind.

As part of that, the Highways Agency is also spending £20 million to improve existing infrastructure for cyclists on the strategic roads network.

In December last year, the Department for Transport gave clearance for new low-level traffic lights designed for cyclists to be used.

This means that Transport for London (TfL) can now install the lights at Bow Roundabout - the first time the lights have been used in the UK.

More than 80% of cyclists favoured the use of low-level signals during the track-based trials of the system, which works by repeating the signal displayed on main traffic lights at the eye level of cyclists.