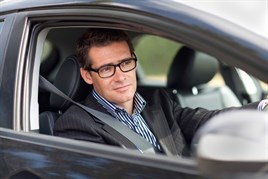 Using a hand-held phone while driving was made illegal in 2003 and motorists face a fixed penalty if caught of three penalty points on their licence and a fine of £100.

The use of hands-free phones, sat-navs or two-way radios when you’re driving is not illegal. But if the police think a driver is distracted and not in control of their vehicle they could still get stopped and penalised.

Philip Somarakis, head of the motoring offences team at Davenport Lyons, said: “The Crown Prosecution Service considers that, in the event of an accident, if the driver was engaged in a hands-free call which resulted in him being avoidably distracted, that will be considered as careless driving.

“However, if it can be proved that the driver was avoidably and dangerously distracted by the call, then a dangerous driving charge will follow.

“In serious accidents which involve life-changing or life-threatening consequences, the police will invariably undertake a forensic analysis and will consider the reaction times of the driver and the available stopping distance.

“The driver will be questioned about the standard of his driving and his mobile phone will be seized and examined.”

Woods believes it’s important that fleet managers should educate drivers on the risks of mobile phone use at the wheel and communicate clearly the reasons for banning these devices.

“Drivers should be reminded that calls at the wheel are not as professional-sounding or effective as calls while stationary and provided with guidance on effective communications, without needing to make or take calls while driving,” she said.

For example, she suggests drivers divert phones to colleagues in the office, or set up a voicemail explaining that they cannot take calls when driving but will return the call within two hours.

She continued: “Managers should also lead by example, never using their own phones while driving or expecting drivers to answer calls at any time.

“All employees should also be briefed to end calls immediately if the person they have phoned is driving.”

Meanwhile, Somarakis believes businesses that permit drivers to make or receive hands-free calls have to balance the needs of the business against the risk of the driver being distracted as a result.