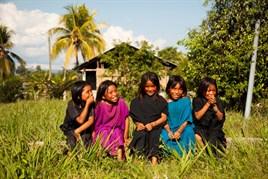 Fleets using the CO2Count emissions monitoring service from The Fuel Card Group have helped to donate thousands of pounds for an environmental charity in 2013.

The donations contributed to fundraising for Cool Earth, a charity who protects immediately threatened rainforest by making the local inhabitants the owners of the land, in such a way that this land then prevents logger access to much larger tracts of neighbouring rainforest. Celebrity supporters range from Dame Vivienne Westwood to Pamela Anderson, while corporate helpers include the likes of Tropicana and Talk Talk.

Steve Clarke, marketing manager for The Fuel Card Group, said: “We are tremendously proud that, having satisfied Cool Earth’s rightly demanding sustainability requirements, we became their first Official Partner within the automotive industry in 2012. Their work in the Amazon is so important for all of our futures. They are now working with 65 villages to keep more than 350,000 acres of at-risk rainforest standing.”

The charity confirmed that The Fuel Card Group’s contribution during 2013 amounted to the saving of 1,725 acres of rainforest, supporting 2,151 people and sheltering 19 endangered species. Altogether, it has meant the protection of more than 400,000 trees and at least 8,000 types of animal in the Ashaninka region of Peru.

THE FUEL CARD GROUP THANK YOU from Cool Earth on Vimeo.