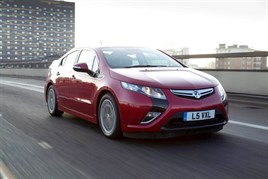 Scottish and Southern Energy and Oxford City Council have been finding out how ultra-low emission vehicles can offer efficiency gains without restrictions on range.

Scottish and Southern Energy (SSE), which has been operating the Vauxhall Ampera extended-range vehicle for the past two years, has achieved an average real-world fuel economy figure of 370mpg – more than 50% above its official stated figure.

The high fuel economy has been achieved because the Ampera is capable of running up to 50 miles on its plug-in charge battery before the petrol engine begins to charge the battery, giving a range of up to 360 miles.

Paul Groundwell, group fleet manager at SSE, has been running one of SSE’s seven Amperas. He says: “My fuel savings have been around £150 a month compared to my previous diesel car so I am saving a huge amount of money.”

Other fleets are also benefiting from their move to ultra low emission vehicles (ULEVs). The Cornwall Partnership NHS Foundation Trust, for example, estimates its saves £14 every 100 miles by using ULEVs.

This is why the Government is supporting the transition to ULEVs through tax benefits, funding chargepoints, providing  incentives and much more. It is investing £500 million to help drive the adoption of ULEVs. The Government is also working with the automotive industry on the ‘Go Ultra Low’ campaign. This was launched by Deputy Prime Minister Nick Clegg and is backed by the Government and BMW, Nissan, Renault, Toyota and Vauxhall in a clear statement of intent by both the Government and industry. It aims to help motorists understand the benefits, cost savings and performance features of the ULEVs available today, including electric, plug-in hybrid and extended range vehicles.

The ULEV with the furthest range can travel up to 700 miles in one journey making it suitable for even high-mileage company car drivers. At the same time, they save on fuel costs and CO2 emissions. Operating vehicles that have zero emissions at the tailpipe when in pure electric mode also has a positive impact on local air pollution, helping to support a company’s corporate social responsibility objectives.

Oxford City Council has deployed ULEVs in its fleet and the response from staff has been overwhelmingly positive.

Trevor Jackson, cemeteries manager, says: “I have been driving an electric vehicle for over a year now and have been very impressed. It certainly attracts a lot of attention and I am regularly asked what I am driving. I love it.”

Groundwell has had a similar experience. He says: “The ride is very quiet due to the Ampera being electric, but the ride is also incredibly smooth, which adds an element of relaxed luxury to the vehicle.”

Drivers cannot feel the transition from electric to petrol and performance isn’t compromised either. “In terms of performance and acceleration at normal operating speed, the Ampera is comparable to a 2.0-litre diesel,” says Paul Adler, fleet marketingand mobility manager at Vauxhall. Any scepticism is often swept aside once people have experienced an ULEV. It is one of the reasons the industry is encouraging extended test drives and the Government is removing barriers preventing the inclusion of vehicles in fleets. Once people use ULEVs they like them.