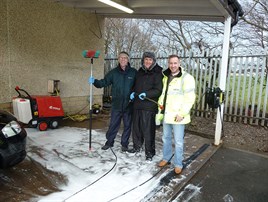 Group directors at Ogilvie Fleet and its sister businesses turned their skills to car washing during the festive period to raise almost £2,000 for charity.

It is an annual tradition for directors across the Ogilvie Group of companies to spend a day washing employees’ cars.

Grateful staff rewarded the directors by digging deep into their pockets and raising £930 for charity - a sum that was matched by Ogilvie Group.

As a result, £1,860 will shortly be presented to a charity as a New Year gift.

“Ogilvie Fleet grew its fleet to almost 11,000 company cars and vans; we continued to introduce innovative fleet management solutions; and our industry-leading customer service continued to be recognised with awards. Meanwhile, the Ogilvie Group achieved another steady performance, with an 11% increase in profit and 6% growth in turnover.

“All of that is due to the dedication of all the staff who work at Ogilvie Fleet and across the Group. The annual directors’ festive season car wash is a thank you to the staff and also raises funds for very worthy causes.”