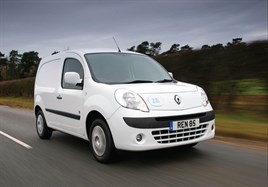 As a result of 55 all-electric Renault Kangoo Z.E. vans supplied and funded by Alphabet, Gnewt Cargo’s deliveries in London have now increased from 500 to 5,000 a day on behalf of customer myHermes, the second largest home delivery service in the UK.

Increasing its number of electric-powered deliveries will save myHermes an estimated 122 tonnes of carbon each year in direct emissions, not including the additional carbon emissions produced from extracting, refining and transporting the fuel, which could add another 20% to the overall figure.

Faced with a short turnaround time, Alphabet worked closely with manufacturer Renault to fast-track vehicles into production under its AlphaElectric scheme meaning that they were delivered in less than one month.

Sam Clarke, director at Gnewt Cargo says: “We use a range of Electric Vehicles for different purposes, but decided Renault Kangoo Z.E. vans were a perfect fit for our needs. The manufacturer recommended Alphabet to us and it all happened quickly because they know the market very well and understood exactly what we needed.

“We have grown 200% this year, and this deal which sees us take the lead on all myHermes deliveries inside the Congestion charge zone simply could not go wrong. Thanks to Alphabet the deal was done quickly and everything is now in place to cut both our carbon and financial outgoings.”

Jon Burdekin, head of consultancy services at Alphabet added: “Renault recommended us to Gnewt Cargo because they knew Alphabet takes electric vehicles very seriously and has the expertise and know-how to make this happen.

“Our consultative services often prove invaluable to fast-growing companies such as Gnewt Cargo. We understand the full picture of electric vehicles in terms of both funding options as well as the practical requirements of implementing, running and maintaining a full electric Fleet.”

“We’re pleased to have played our part in helping Gnewt Cargo grow and we look forward to supporting their continued success.”