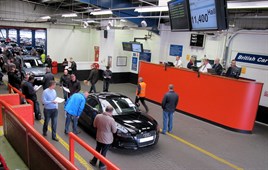 The relentless pursuit of volume and market share which sees many more cars registered than customers need will inevitably lead to faster depreciation for car owners.

Now the pressure is back on dealers to register more cars in October than their customers want as 2014 heads toward a year-end record total that could even exceed the officially forecast 2.45 million.

The intensity of the pursuit of new car volume is revealed in confidential daily registration figures seen by CAP.  These showed the rate of registrations ramping up in the second half of September - confirming private feedback from dealers to CAP detailing mounting pressure to meet big manufacturer targets.

While 41% of September’s registrations took place in the first ten days of the month, the final ten days contributed 45% of the total – many of which were registered to dealers themselves.

The list of incentives offered by manufacturers to dealers in October in many cases exceeds the September push, according to CAP’s experts who monitor behind-the-scenes market activity every day.

Zero rate finance, deposit contributions up to 20% or more of the vehicle’s value, hefty discounts, nil deposit deals and monthly interest rate reductions are all in play in an attempt to push registrations toward the highest total for a decade.

Some dealers are even under pressure to persuade Personal Contract Purchase customers to swap into a new car as early as halfway through their three-year contract term, to help meet new car registration targets.

But despite the apparent economic good news of a burgeoning new car market recovery there is no such thing as a free lunch, say CAP experts. More new cars forced to be sold as used cars inevitably means greater pressure on used car values across the board – which means existing car owners will ultimately pay.

“Our prediction that this September would be the biggest in a decade proved correct and it is now clear that some manufacturers are on a mission to push new registrations hard through the final quarter of 2014,” said CAP’s retail & consumer specialist Philip Nothard.

“A number of dealers have even told me they are embarrassed by having to call people who only recently took a PCP deal and try to persuade them to take yet another one, long before they expected to change their car.