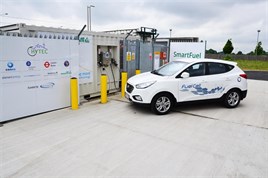 Sainsbury’s has announced the UK’s first supermarket forecourt hydrogen dispenser will be located at its Hendon store by the end of the year.

The SmartFuel station will be able to fuel a growing number of hydrogen-powered fleets driving around the Capital.

Hydrogen powered vehicles’ only by product is water, with little sacrifice to transport performance: they can refuel in less than three minutes and offer drivers the same range and speed as conventional vehicles.

Avishai Moor, fuel and kiosk category manager from Sainsbury’s said: “Hydrogen vehicles are both environmentally friendly as well as efficient so we are really excited about being the first UK supermarket to trial this new technology and make it accessible to our customers.”

“Making hydrogen technology available at a supermarket for the first time is another big step in encouraging the use of cleaner, greener fuels to reduce air pollution and protect the nation’s health,” commented  Diana Raine, Air Products’ hydrogen energy business manager.  “We’re already leading the charge with a network of hydrogen stations across London and this additional station will set us in good stead for the UK arrival of commercially available hydrogen vehicles over the next few years.”

Owned and operated by Air Products, the 700-bar station is being delivered as part of an exciting project aimed at creating the UK’s first hydrogen transport system.

The London Hydrogen Network Expansion (LHNE) project, backed by UK government, is co-funded by the Technology Strategy Board (now Innovate UK).  TSB first supported LHNE in 2012 as part of a £7.5 million initiative to accelerate the commercialisation of projects involving fuel cells and hydrogen energy systems.  Its aim was to link smaller-scale projects together to form complete low-carbon solutions.